"The MOST Unique experience" Fran had is FACE READING

Describe a unique experience you have had?

One of the first organizations I joined when we moved to Rancho Santa Fe was the Newcomers Club. They provide a variety of activities to introduce one to new and old members of the community, provide activities (book clubs, walking groups, etc.), and recommendations for services and restaurants in the area. They also have a monthly luncheon with a program.
A couple of of years later, as President, I met with the board to discuss some program ideas for the coming year. One of the members mentioned Face Reading. I had never heard of it, hence, my initial reaction was, “Isn’t this one of the reasons California is known as ‘La la Land’?” She assured me it was legitimate, so I called the contact and, very hesitantly, made an appointment with a woman named Barbara Roberts.
Barbara was a sweet, very soft spoken young woman and she put me at ease immediately. She gave me a brief history of Face Reading and I was stunned to learn it was an ancient Chinese science. It has been around for centuries! Abraham Lincoln selected his cabinet using this.
Barbara was a nurse and became interested in this art so she could better understand and help her patients. Barbara is also very intuitive, which no doubt gives her an edge over other Face Readers. I was surprised as she accurately described me, studying my hair, facial features and structure. Everything she told me resonated. I could hardly wait to have her read the faces of everyone I knew. (Sidebar: by now, I think I have!)
Here is my reading: 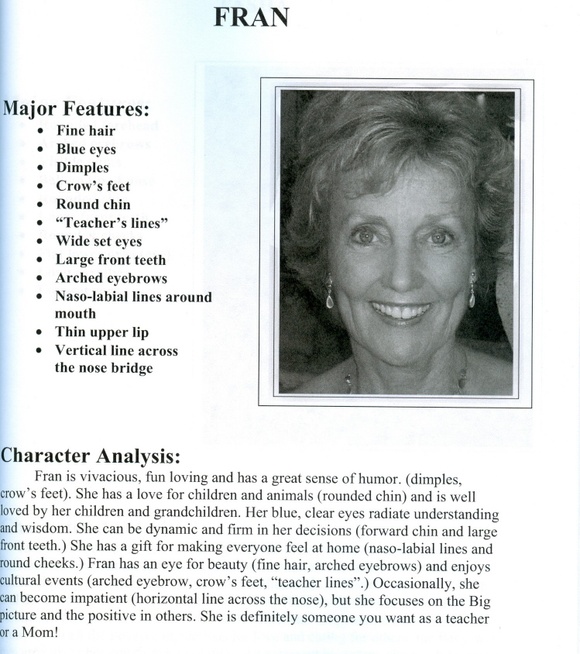 Newcomers Club booked her for a luncheon and it was a very popular event. I wasn’t sure how she could do this with a large group, but she pulled it off by bringing up several different foreheads/chins/eyes/etc. and describing their meaning. There were audible gasps in the audience.
Barbara has become a friend and has “talked” our family through many a crises. The first, Thanksgiving, 2003. AJ had suffered three miscarriages after Will’s birth and was extremely distraught. Barb took AJ in the other room and quietly told her she “saw” her with a baby girl the following summer. AJ was beyond consoling at that point, but, miracle of miracles, on July 27, 2004, our precious Kacy came into our lives.
On a humorous note, niece Betsey was also there for the family Thanksgiving. Shortly after she returned home, she found out she was also pregnant. She said, “Well, Barbara could have mentioned to me, ‘Hey, honey, put down that Chardonnay. You’ve got a bun in the oven, too!’” Cleo arrived July 24, 2004.
What started out a lark, ended up with enormous personal insight and a life long friendship. 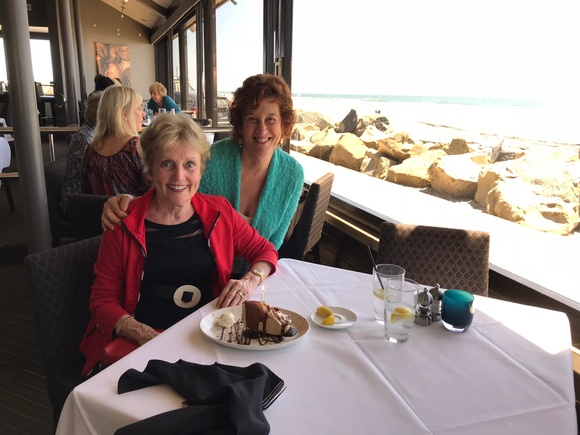 Posted by Barbara Roberts at 9:40 PM No comments: